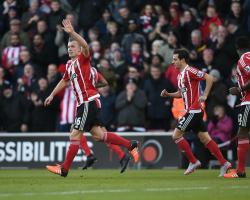 Striker Austin was in the stands at St Mary's, after completing his ÃÂ£4million move from QPR, to watch James Ward-Prowse triple his Premier League goal tally in a 3-0 win over West Brom.

England Under-21 midfielder Ward-Prowse struck with a free-kick and a penalty to put Saints two up at the break before Dusan Tadic added the third in the second half.

Boss Koeman, who hopes Austin will provide "goals and competition" for the club, is hoping the floodgates have now opened for Ward-Prowse.

"The free-kicks are one of his qualities," he said

"We tell him to keep working on them in training because he can score out of that situation.

"It's important for the boy, it will lift his confidence

Then when you are 1-0 up West Brom have to do more and do things differently."

Dawson was again the guilty party in the 33rd minute, although the defender was perhaps unlucky that his collision with Matt Targett in the area was adjudged a foul.

Nevertheless, with regular penalty taker Tadic on the bench, Ward-Prowse did the honours with a coolly taken spot-kick which sent Myhill the wrong way.

Tadic entered the fray just after the hour and took only eight minutes to get his name on the score sheet and wrap up an emphatic victory.

"It was a comfortable win," added Koeman

"We know how difficult is to beat West Brom

It's a very good result.

"We had total control of the game, they didn't create many chances and we had chances to score more

It was a very good team performance."

"Southampton were the better team," he admitted

"We looked flat, we had no spark,

"But I'd be interested to see how many teams have played their second game away from home this weekend and picked up any points.

"The lads looked tired, and we've done well away from home this season

But just after Christmas, two away games is very difficult

Why not have one away and then one at home?

"But take nothing away from Southampton

It was a bad day at the office for us, but we'll dust ourselves down and move on."