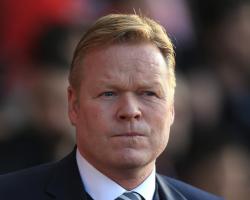 Koeman's side surprised almost everybody with their impressive start that came to an abrupt halt when they were beaten at home by Manchester City last month.

That defeat triggered an alarming run that saw them lose four league games and hit a new low with a midweek League Cup quarter-final defeat at third tier Sheffield United.

The Saints manager admitted his players' confidence had been knocked, but now he believes the emphatic victory over Roberto Martinez's side at St Mary's on Saturday will revive their campaign.

We were sometimes unlucky, we didn't play badly," Koeman said.

"Maybe in the last few weeks we lost a bit of confidence in our ball possession.

"But the best medicine is to come back to playing like we did in the first part of the season."

While Koeman was pleased with the improved performance, he was keen to insist the standards set against Everton must be maintained when Saints visit Crystal Palace on Friday.

"It's typical football that one day it's black, the next day it's white

I'm a long time in football," he added.

"You just have to prepare yourself for the next one and don't say we'll win today.

"It shows we had a good spirit today but Friday is another game and we have to prepare the best way we can."

Southampton made the most of poor Everton defending, taking a 38th minute lead when Romelu Lukaku diverted the ball into his own net and going on to seal the win with second half goals from Graziano Pelle and Maya Yoshida.

For Martinez, the result came as a major disappointment after his side had secured a first win in five games with victory over QPR on Monday.

The Everton manager acknowledged his side are struggling for consistency, but insisted that was part of their education as they battle to combine the demands of the Europa League with their Premier League campaign.

"It is a setback -- we had a good result on Monday and I don't think we've been involved in a good run of results like we did last season and that's what we are chasing," Martinez said.

"Southampton have been in a bad run but now, from our point of view, we have to get ready for the game against Stoke.

"In the league, we never had three or four good results that can help

We get heavily punished and sometimes we make an error that affects the score line.

"It's part of the learning curve

We want to be involved in Europe and it's part of our learning process to be consistent in the league when we've got games in the midweek for other competitions."

And while Martinez claimed he was satisfied with some aspects of his side's display, he conceded they cannot afford to repeat the defensive errors that cost them the game.

"The most disappointing thing was the way we defended our box

We were a little bit soft and were undone by three balls that went into the six-yard box," he added.

"We are to blame for the defeat because we didn't defend any simple ball into the box well.

"Our record shows that we are normally a lot better in that respect and that is where we lost the game."