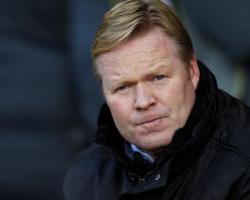 Tuesday's embarrassing Capital One Cup exit to third-tier Sheffield United made it five successive defeats in all competitions, ratcheting up the pressure on Saints ahead of their clash with Everton.

Suspension and injury problems compounded the squad's understandably dented confidence, yet Koeman's men, playing a 3-5-2 formation, rose to the occasion to secure a 3-0 win.

Efforts from Graziano Pelle and Maya Yoshida complimented a first-half own goal from Romelu Lukaku as Saints secured their first win since November 8 in some style.

"Then always the answer is on the pitch and we had a great, unbelievable spirit.

"We changed the system and it's always important if you change the system the players need to be comfortable in that system.

"We spoke about that and had two sessions to do that in a different way and we had a good organisation.

He was showing with a lot of energy and you need that to play and to have the best of yourself.

"Normally you have the luck on your side

Maybe we got a little bit lucky the first goal but in the second half we controlled the game, they didn't create a lot

Fraser had two fantastic saves in the last 15 minutes.

"The team was outstanding and the team was the key to winning the game."

This performance was much more like the Southampton side which impressed so much in the early stages of the season.

Shane Long, Nathaniel Clyne and Harrison Reed, on his first Premier League start, were particularly impressive for Saints, who Koeman hopes are now back on track.

"We work hard to keep going, to continue what we are doing," the Dutchman said.

"It was difficult because we had four or five defeats in the last weeks, sometimes unlucky as we didn't play bad, but not so good as in the first part of the season.

"It's always the best medicine to come back to what we showed in the beginning of the season."

The result means Southampton will spend Christmas in fifth place - unless Arsenal thrash Liverpool on Sunday - and is a timely boost given there are some tricky fixtures on the horizon.

As for Everton, manager Roberto Martinez's overriding emotion was frustration after his side failed to build on the impressive 3-1 defeat of QPR.

"It is a setback," the Spaniard said

"Obviously, we had a very good result on Monday.

"As you can imagine, we wanted to follow that through

I don't think we've been involved in a good run of result like we did last season and that is what we are chasing.

"Clearly, it is a real setback

I thought Southampton had been in a very unfortunate run and I don't think they deserved to lose all the games that they did, but today they had all things going their way.

From our point of view, we just need to get ready for the game against Stoke at home and make sure we get a good run of results now."