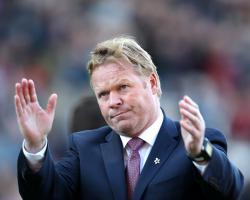 The former Argentina defender ended a 16-month stint on the south coast last summer to sign a five-year deal at White Hart Lane.

Pochettino's exit was the catalyst to an unparalleled talent drain from St Mary's, although successor Koeman has not only steered the club to calmer waters but new heights.

With five matches remaining, Saints are just a point and a place worse off than Spurs in sixth and can usurp them in the European spots with victory in Saturday's early kick-off.

"Everybody was afraid because we had to make a lot of changes in the team," Koeman told Press Association Sport

"But I think the quality of the players that we brought in were good, at a good level

I think the rest of the players had really a good aspiration and ambition to do a good season, to play a good season at a good level.

"Now we are fighting for a high position in the table

There's still five games to play and a very nice one this Saturday afternoon.

"It is Tottenham, the difference is only one point and, okay, for the fans maybe it makes it a little bit more special because Mauricio is now the coach and was the coach of Southampton.

"He is the coach of the opponent this Saturday, so that makes it special but the game will be decided between the white lines."

Koeman was speaking at St Mary's after meeting Barclays Spirit of the Game hero Tina Croucher, who was being rewarded for her community work at the club.

The Southampton manager and midfielder Victor Wanyama answered questions from a handful of supporters as part of the event, where talk of Pochettino was rarely far away.

Koeman says his return along with the potential implications of the result makes Saturday's match the biggest at St Mary's since he took the reins.

A positive result would see Saints break their record Premier League points haul set last year by Pochettino, although he is unlikely to get a particularly warm reception.

The former Argentina defender's departure left a sour taste with many Southampton fans, whose travelling support gave him a taster of what to expect at White Hart Lane earlier in the season.

"Sometimes if you go as a Barcelona player to Madrid the reception is difficult, and sometimes in Holland," Koeman said, when asked if he has such a bad reception.

"But, okay, I think the reception for Mauricio normally has to be good because he did a great job for Southampton.

There certainly does not appear any bad blood between Koeman and Pochettino, despite the latter suggesting earlier in the year that he handed the Dutchman an easy job at Southampton.

Koeman took those comments in his stride, joking at the time that he only came to Southampton "to have a nice little holiday".

Now, just days before the game, the Saints boss gave a more serious answer, praising his Spurs counterpart for the legacy he left at St Mary's

"I think they make the beginning (of this) and developed the quality of the players, the young players," Koeman said.

"I think the structure and organisation in the team, the spirit of the players starts under Mauricio.

From what I heard, maybe I try to do more training sessions with the ball and maybe he was a little bit more physical.

"I think the start, for the development of the team, was under Mauricio and he did a great job last season.

"We continue (that) and so far we made it a little bit better than it was, but that is all about the experience and quality of the players."

:: Ronald Koeman was speaking at a Barclays event to inspire the next generation of fans

To win Barclays Premier League tickets and other football experiences search: Barclays Spirit of the Game