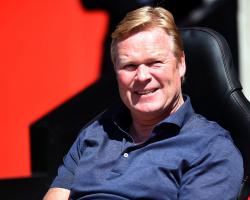 The visitors took the lead on the stroke of half-time through former Saints trainee Tim Sparv before Jay Rodriguez levelled from the penalty spot for his first goal in almost 17 months to earn a 1-1 draw.

Southampton now travel to Herning next Thursday needing a positive result to reach the Europa League group stages and, whilst he was not completely happy with his own team, Koeman pinpointed theatrics and time-wasting from Midtjylland as a bone of contention.

"I'm a little bit disappointed about the final result because 1-1 at home is not the best result that you like to have," he said

"I have a lot of irritation about wasting time because, in my opinion, if it is the last five minutes I can understand it but it was more than that.

They had good organisation and played a good game but we still have a possibility to win next week."

Midtjylland coach Jess Thorup said he was aware of Koeman's grievance, but did not agree with the Dutchman's comments.

"Every time we had set-pieces he was yelling and shouting at the referee," he said.

It wasn't a tactic."

Southampton thought they had levelled before Rodriguez's penalty only for Steven Caulker to controversially have his headed effort chalked off for a foul in the build-up - with Koeman certain it was the wrong call.

"We were unlucky - in my opinion it is a normal goal but we know referees in Europe see that slightly differently than in the Premier League.

"It was a normal goal but we had good pressing in the second, it is not the best we have shown but we made four, five or six big chances."

Maya Yoshida almost secured a dramatic late win as he hit the post deep into stoppage time but it was Rodriguez's first goal since March 2014 that keeps Saints in the tie.

And the England international was delighted to get back on the scoresheet after battling back from a career-threatening knee injury.

'I wanted to bring us back into the game," he told BT Sport.

"The reaction of the crowd was lovely, that was the sort of thing I've been waiting for ever since I've been out injured

I'm sure we can go there next week and get the win.

We were a lot better in the second half."

Koeman was also happy to see Rodriguez back on the scoresheet and insists the best is yet to come from the former Burnley forward.

"You see that Jay is more close to being 100 per cent and be back to the player he was," he said.

"He needs game time and sessions and it is good

We need that kind of quality player."