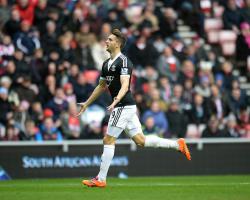 A ruptured anterior cruciate ligament means it has been over a year since the 25-year-old last played, but that has not prevented speculation mounting over his future.

Rodriguez only has a season left on his contract and there have been suggestions that a summer move could be on the cards, with Tottenham, Manchester City and Liverpool apparently ready to test Saints' resolve.

However, the England international now seems ready to pen a new deal at St Mary's, with Koeman rating the chances of the forward signing as eight out of 10.

"He was talking to the club," the Saints boss said

"He's a good player and I think he will be an important player for next season.

"If he stays, I think that is a good signal to the club, to everybody."

Rodriguez is not the only high-profile player out of contract next summer, with right-back Nathaniel Clyne the subject of even more fervent speculation.

Koeman last week gave the England full-back a 10-day deadline to inform the club whether he would sign a new deal and talks are planned after Saturday's trip to Leicester.

"We like to know it because always with players that have one season of their contract left, that is business," the Dutchman said of the Manchester United target.

"We are nice people, straight people at the club but we have to think of the future of the club and team.

"He mentioned at different times to everybody at the club (that he is happy) and I understand it's all about the contract, the future, and he has to make that decision.

"I can give him some advice but it's difficult."

Unlike Rodriguez, Clyne is in line to feature at the King Power Stadium this weekend - a match James Ward-Prowse will miss through suspension.

Fraser Forster, Dusan Tadic and Emmanuel Mayuka are unavailable to face the Foxes through injury, as is Morgan Schneiderlin.

Last week Koeman said the France midfielder would miss the rest of the season with a knee complaint, but the prognosis has improved since then.

"It's going much better but he is not close to being part of training," he said.

"I mentioned last week maybe he is out until the end of the season, but maybe he is fit for the last one or two games.

"We have to wait but it looks a bit more positive than a week ago."

Schneiderlin is another being linked with a summer exit, but Koeman played down such talk ahead of the trip to Leicester.

Asked if he could have played his last game for Saints, the manager said: "I don't think so.

He has a contract with the club and nobody has a serious bid for the player, for anybody.