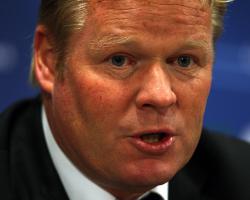 Koeman has been handed a three-year contract to replace Mauricio Pochettino, who left for Tottenham after guiding the Saints to eighth in the Barclays Premier League last season

The former Holland international is joined at St Mary's by his older brother Erwin, who has been named assistant first team manager, and Jan Kluitenberg, who will be an assistant and fitness coach.

Koeman said in a statement: "I am thrilled to be the manager of Southampton Football Club.

"From my very first meeting with (executive director) Les Reed, I could see clearly that this was the right club for me

We share the same philosophy of football, and the same belief in how to develop the club.

"Southampton have a talented first-team squad, a world-class academy and the infrastructure to sustain success in the Premier League.

I cannot wait to get started."

Koeman resigned from his previous post at Feyenoord last month having led the team to second, third and second during his three years at the club.

The 51-year-old has won the Dutch title with both Ajax and PSV Eindhoven, the Copa del Rey at Valencia and coached Vitesse, Benfica and AZ Alkmaar during a 14-year managerial career.

His reputation for employing an attacking brand of football and committing to the promotion of young talent will sit well with Southampton who have nurtured the likes of Theo Walcott, Gareth Bale, Alex Oxlade-Chamberlain, Adam Lallana and Luke Shaw in recent seasons.

Executive director Reed said: "From the moment we met with Ronald, it was clear he had the vision and ambition to take our club forward, that he shared our football philosophy and could see the opportunity to move our club to the next level.

"The club, the players and the fans will all be excited to have a man of Ronald's experience at the very highest level joining our club.

"Ronald's passion for the opportunity here at St Mary's was very clear, and we look forward to continuing our growth with him as part of our team."

One of Koeman's first priorities will be to bring stability and direction to the club by resolving the futures of key players.

As well as Pochettino, Rickie Lambert has already left the club, while Lallana, Shaw, Calum Chambers and Dejan Lovren have all been linked with moves away.

Saints will be hoping Koeman's pedigree as both a manager and player will carry weight with the club's top talents.

In a glittering career that included spells at PSV, Ajax and Barcelona, the defender won four Eredivisie titles, four Primera Division titles and two European Cups - the second of which saw him score the winner in a 1-0 win over Sampdoria in 1992.

Koeman also won the European Championship in 1988 with Holland, for whom he played 75 times, and was named Dutch Footballer of the Year in 1987 and 1988.

Southampton will also name a new goalkeeping coach in the near future to replace Toni Jimenez, who followed Pochettino to Tottenham.