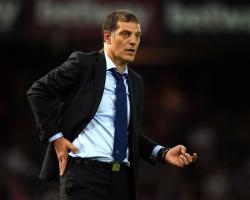 The Hammers and Saints face the second legs of their third qualifying round ties this evening, against Romania's Astra Giurgiu and Dutch side Vitesse Arnhem respectively.

While Southampton boast a comfortable three-goal advantage, the east Londoners head to the Stadionul Marin Anastasovici off the back of a 2-2 draw at Upton Park.

New boss Bilic will watch from the stands after being sent off in stoppage time against Giurgiu, where a largely inexperienced team will be looking to get a positive result as he rests key players for Sunday's Barclays Premier League opener at Arsenal.

"That is all a part of the job," he said when asked if he would expect a backlash from supporters.

"I have to make decisions, my decision is not to lose the game but to win it.

"There have been many unusual things but we knew from the start that it is not an ideal pre-season because we have had qualification, starting from the bottom.

"I don't like the excuse, I don't see it as a problem, it is a situation and I'm trying to cope with it.

"We want to show respect but not to jeopardise the more important competition."

None of the team that started the first leg has travelled to Romania and, of the players there, only Kevin Nolan, Carl Jenkinson and Manuel Lanzini are likely to feature heavily in the forthcoming league campaign.

Bilic admitted to having rethought his strategy after letting slip a two-goal lead a week ago in a Europa League campaign which came courtesy of the Fair Play League.

Ronald Koeman's side continued where they let off against Vitesse, triumphing 3-0 in the first leg thanks to goals from Graziano Pelle, Dusan Tadic and Shane Long.

It is a convincing advantage that has seen one bookmaker price Saints at 1/250 to progress, but manager Koeman will not be letting his foot off the pedal.

"It is a crazy thing to think about," the Saints boss said about resting players, before rather unfortunately damaging his Achilles in training.

I hate to lose and that mentality needs my players as well."

However, Kenny McLean's away goal gives them hope ahead and captain Ryan Jack, linked to Everton, cannot wait to sample the electric atmosphere in a sold-out Pittodrie.

"This is exactly what I want as a player," he said

"I want to be playing in the top competitions

For us, the Europa League is just that right now."