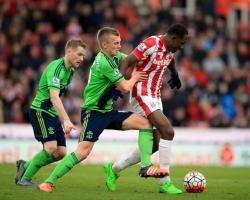 It has felt like Saints' impressive rise has faltered a bit this season, but a few impressive patches of form means they moved up to seventh with eight matches remaining.

Saturday's 2-1 win at fellow European hopefuls Stoke saw them usurp the hosts and move onto 44 points, boosting their chances of returning to continental competition.

Ronald Koeman's men bowed out of the Europa League at the play-off juncture this term and Ward-Prowse is determined to make amends by qualifying for the competition again.

"It's important," he told Press Association Sport when asked about Saturday's win

"Obviously we had a good run of six games

"We had two games where we were disappointed with how we played and this is a real good three points that got us back on track and put us ahead of our rivals for what we want to achieve.

"Stoke are geared up to play European football like us, so to be able to get one over on them is nice

"Hopefully that'll give us some more momentum going into the last few games.

"(The ambition is) Obviously to play European football

"We wanted to do it last year and we're all disappointed at the beginning of the season not to achieve that, so were eager to get back into that and get the fans what they want."

Such a finish would satisfy many Southampton supporters in the long-term, but the immediate focus is on beating Liverpool before the international break.

Adam Lallana, Dejan Lovren and Nathaniel Clyne could feature having swapped St Mary's for Anfield in the not so distant past, making victory next Sunday a welcome - and potentially important - fillip.

"These three points don't mean anything if next weekend we go and lose to Liverpool," Ward-Prowse said after Graziano Pelle's brace at the Britannia Stadium.

"That's a game that all the fans especially want to win, we want to win and I think if we win that it gives us even more momentum going into the final leg."

A strong end to a topsy-turvy campaign could even see Southampton better last season's seventh-place finish - their best ever in the Barclays Premier League.

It would be a somewhat surprising end to a decent if unspectacular season in which Stoke have received far more plaudits.

Stoke midfielder Ibrahim Afellay is not too downbeat by the Saints loss as a result, with European qualification still on the players' minds.

"We could have put ourselves in a very good position yesterday and we're very disappointed because we deserved better."