How Southampton's Masters Football Team Would Look in 2020

Good, you’re remembering Masters Football, just as you should.

Few things could be more fun than watching former heroes battle it out for the title of ‘still somewhat good at football and just about relevant’.

Before we dig in and pick a fantasy team if ​Southampton were to compete in Masters Football nowadays, here are the restrictions we’ve placed on participating players.

Without further ado, the Saints in Masters Football... Club Lowlight: A three-game suspension in 2007 for lashing out at ​Stoke City’s Jon Parkin.

A Southampton player becomes a Southampton legend if his career and attitude ever resemble anything like that of Kelvin Davis. Simple.

Davis spent a decade at St Mary’s, and his performances earned him one ​Championship and two League One Team of the Year inclusions. He’d take Masters Football seriously - David James-style serious - and so he should. Wayne Bridge was a sturdy and consistent fullback.

His TikTok videos are not sturdy or consistent.

He should stick to the football. Club Lowlight: When his direct goal from a corner against Portsmouth was cruelly taken off him and jotted down as an own-goal.

A club legend at Southampton, Dodd also spent a few years as youth academy director for the club, helping the likes of ​Calum Chambers, ​Luke Shaw and James Ward-Prowse develop.

He now teaches PE at one of the most 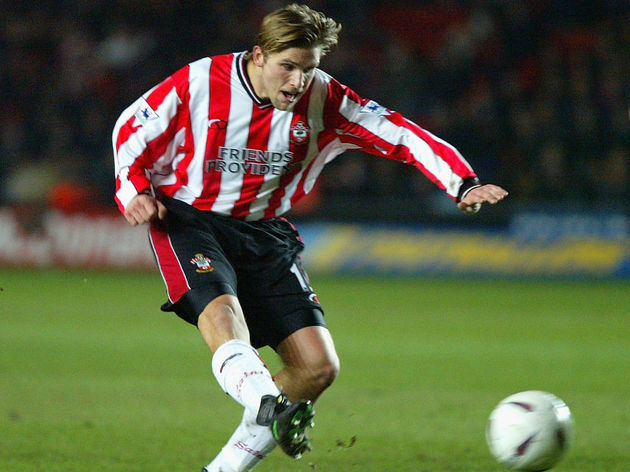 Club Lowlight: Losing the FA Cup final of that season to ​Arsenal.

Only seven men have made more appearances for European nations than Anders Svensson’s 148 for Sweden. Judging by his Southampton offerings, it’s easy to see why.

If the Saints were lacking stamina and control in the middle of the park, they’d look to him. A plodding journeyman striker that became an Club Lowlight: Is there one?

If Masters Football existed in 2067, ‘Le God’ would still be a shoo-in for the Saints.

He’s a club legend, and the scorer of some of the team’s best, most famous and most spectacular goals. Southampton would admit it themselves, but their star striker was prone to carrying them through the tough times. The easiest of easy picks. Club Highlight: His part in that brilliant 2002/03 season.

Club Lowlight: A career-ending injury against Southend in 2007.

Lundekvam is one of the best defenders the Saints have ever fielded, and a squad without him wouldn’t really be a Southampton Masters Football team at all.

Grit and determination are his two middle names (m, and Southampton fans certainly saw them in equal measure across his 12 years at the club. Club Highlight: A stellar career as a true club legend.

A place on the bench for the 51-year-old is the least we could do. Club Highlight: Martin Tyler crying 'he has picked his spot' after his powerfully placed long-shot found its way into the top corner against Portsmouth in 2005.

Club Lowlight: The persistent injuries that kept him out for so long.

He showed aggression and commitment as an 11-a-side player. So, when called upon, why should six-a-side be any different?