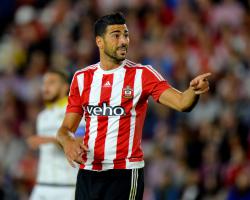 Following an impressive Euro 2016, the Italy striker had been linked with a move to join outgoing Azzurri manager Antonio Conte at Chelsea.

Pelle is set to leave St Mary's this summer but Press Association Sport understands the 30-year-old will be heading to the Far East rather than west London.

Chinese Super League side Shandong Luneng is believed to be the destination in a deal worth ÃÂ£13million - a profit of around ÃÂ£4million on a player signed from Feyenoord two years ago.

Pelle, who turns 31 next week, only has a year remaining on his Southampton deal and the Premier League club were believed to have been reluctant to offer an extension.

The forward is understood to have been eyeing a move to China since January, which is part of the reason behind the timing of Saints' move for QPR's Charlie Austin.

A ready-made replacement, Austin will compete with Jay Rodriguez and Shane Long in the attacking positions once Pelle's move is complete.

Saints are understood to be actively searching for a defensive midfielder to replace Victor Wanyama and have already signed Nathan Redmond from Norwich in a ÃÂ£10million deal, just days before they collected a club-record fee when Sadio Mane moved to Liverpool.