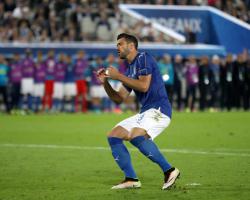 Pelle, who turns 31 on July 15, had only one year remaining on his Southampton deal and had been linked with a move away from St Mary's Stadium during the January transfer window

The Barclays Premier League club confirmed the Italian's departure on Monday for an undisclosed fee, which is believed to be worth around ÃÂ£13million

A statement on www.saintsfc.co.uk read: " Everyone at Southampton Football Club would like to thank Graziano for his efforts during his time at St Mary's and wish him well for the future."