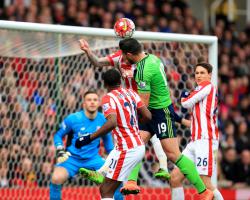 On this evidence it was a surprise that the Italian had gone so long without registering as his strength and movement proved too much for the Potters in front of a record Barclays Premier League crowd of 27,833 at the Britannia Stadium.

Pelle moved into double figures for his club this season with a header from a corner before striking again 30 minutes in to leave Southampton in charge.

Dusan Tadic's inexplicable miss on the stroke of half-time looked costly when Marko Arnautovic pulled one back but Saints held on, even after substitute Sadio Mane picked up his second red card of the season following a clash of heads with Erik Pieters.

Stoke's first-half defensive fragility was surprising given captain Ryan Shawcross was restored to the line-up for the first time in nine fixtures following a back injury.

And when Giannelli Imbula strode past two green shirts and fired wide and Ibrahim Afellay rifled into Virgil van Dijk, there was little indication Saints would control proceedings.

However, the visitors were on top from the moment Pelle's first headed chance had to be tipped over the crossbar by Jack Butland's right hand.

From the resulting Steven Davis corner, the Italian lost Philipp Wollscheid and nodded past Butland to end a 132-day wait for a goal.

Saints continued to cut open the home side's defence with ease as Shane Long collected Cuco Martina's pass and forced Butland into another save and it was no surprise to see them double their advantage on the half-hour mark.

Pelle found Tadic off the left-hand touchline and lost Geoff Cameron when receiving a return pass before slotting beyond Butland's outstretched arm and into the corner of the net.

Mark Hughes' bad afternoon was not helped by the fact he was forced into a change straight after the goal with Xherdan Shaqiri, who later had ice on an apparent thigh injury, withdrawn.

It should have been bleaker still for the Potters entering the break, though, as they benefited from Pelle's air-shot and then Tadic's hesitation in front of goal.

The Serb and Long found themselves two-on-one and Southampton's striker squared for Tadic, who tricked Butland and Shawcross by feigning to shoot before taking another touch to allow Cameron to get back when he just needed to roll in a right-footed finish.

At 2-0 it did not look pertinent but Arnautovic pulled one back seven minutes after the interval.

The Austrian's 10th league goal of the season came from a near-post flick past Fraser Forster following a cross from Afellay and Stoke, sensing a chance to level, took hold of the game.

Forster beat away a try from Arnautovic and only Van Dijk's desperate intervention stopped an unmarked Mame Diouf from giving the keeper another shot to deal with.

Southampton remained a threat on the break and felt they should have been given a 74th-minute penalty when Tadic latched on to Pelle's flick and knocked the ball past Butland, who clearly upended the winger as he tried to go around him.

Both referee Lee Mason and his assistant were not interested and a peeved Tadic was still gesticulating when Koeman took him off moments later.

James Ward-Prowse's 25-yard free-kick rattled the crossbar before fellow substitute Mane, who had had a Pieters cross drilled in to his face earlier, was dismissed, seemingly for a headbutt on the full-back when the two challenged for the ball in the air in the closing stages.