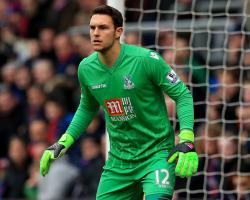 The 26-year-old is Saints' third arrival of the summer after winger Nathan Redmond, from Norwich, and Bayern Munich midfielder Pierre-Emile Hojbjerg.

"I'm over the moon to join a club like this," McCarthy told youtube.com/southamptonfc .

There's the Europa League to look forward to this season, so there's going to be a lot of games.

"With the stature of the club, I'm honoured to be here and I'm looking forward to getting working with everyone."

McCarthy made just seven appearances for Palace in his one season after joining from QPR.

However, he is relishing the chance to stake his claim at St Mary's.

"It's a club close to home for me and the way the club's run and the way it's going it's a massive positive," he added.

"I played with a few of the lads here already so I spoke to a couple of them and they had obviously nothing but good words to say about the place so it was an easy choice for me.

"It's definitely a club going forward

Coming down here on my first day to the training ground and you see the facilities and everything, it's amazing down here what the club has done, so I'm looking forward to the years ahead with it."