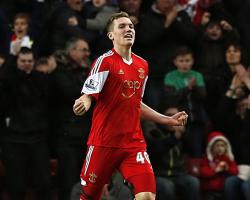 Last season surpassed all expectations for the teenage striker as he became a regular under Mauricio Pochettino, making 20 first-team appearances as back-up to Rickie Lambert.

Things have gone awry this season, though, with injury stunting the 19-year-old's progress.

Gallagher has not even been named in the matchday squad since the arrival of Koeman, although he gave the Saints boss a nudge in some style on Tuesday evening.

The England Under-20s international's wonderful strike secured the 10 men of Southampton a 2-1 extra-time win over Blackburn in the Under-21 Premier League Cup final at St Mary's, where the first-team manager was amongst the 12,356 crowd.

"It was unbelievable, that's all I can really think to say," Gallagher said, smiling.

"I was always thinking throughout the game it would be nice to get one and to get in the way I did was quite special to me.

It sort of feels like it has just started, but it's almost coming to an end

"I have always had my focus on the under-21s when I got back fit and I am just looking forward.

"We've got the league to come now, so hopefully we can do well in that and crack on."

Gallagher is hoping to help Saints end the Barclays Under-21 Premier League strongly, although his performance in front of the on-watching Koeman only strengthens his case for a first-team place.

"Well I know they sort of watch all the under-21 games," Gallagher said.

"You always know you've got to impress and do what you can to get in the first team.

"Hopefully he (Koeman) enjoyed that one."