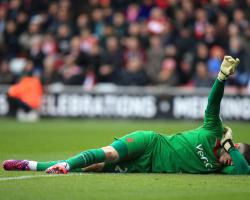 The 27-year-old was taken off on a stretcher during Saturday's Barclays Premier League game against Burnley at St Mary's Stadium following an awkward fall after colliding with Sam Vokes.

Scans showed damage to the player's left patellar tendon, with the usual time-frame for recovery from this type of injury between nine months and a year.

Southampton confirmed on the club's official website: " Forster will be ruled out for the rest of the season

A long-term prediction of when he will return will be made in due course."