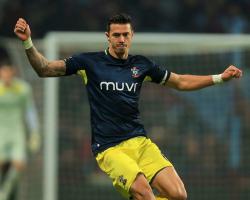 A second-half goal from Marc McNulty proved enough to put the Sky Bet League One side through, and inflict a fifth straight defeat on the Saints.

Afterwards, manager Ronald Koeman accused Blades boss Nigel Clough of showing a lack of respect, with words exchanged on the benches following the goal and United's first-team coach Chris Morgan sent to the stands before the Dutchman then refused to shake hands at the final whistle.

Portuguese defender Fonte insists the players must shoulder their share of the responsibility for what was a below-par performance on a damp night in South Yorkshire.

"It was not acceptable

I would firstly like to apologise to the fans, they didn't deserve this

That is not us," Fonte told Southampton's official YouTube channel.

"Give the last games we have lost, we played and we showed that we are better than the opposition and we had the opportunities to win and deserved more from them games.

"But after Tuesday night, I am disappointed obviously and I am angry because we had a great opportunity to go and do something special and we just blew it.

"Everyone needs to take responsibility, not hide in their shell

We must stand up and be counted because there's another game in the Premier League and we need to stop this bad run.

"The minimum we can do is try our maximum and give everything that we can, but it was disappointing because I think we should have done much better.

"I just want to apologise to the fans, because they didn't deserve it.

It is an opportunity lost, but there is still a long season ahead."

Southampton - who lost at Burnley last weekend, following successive defeats by Manchester City, Arsenal and Manchester United - will look to get their campaign back on track at home to Everton on Saturday.

Fonte believes Saints must stick to their slick passing style which helped take them up to second place in the Barclays Premier League earlier in the season.

"Especially after the first goal we started going long and with all due respect, we are not a long ball team

For the last five years we've been playing football," the defender said.

"We've opened teams up with one-twos, crosses in the box, playing out of defence, and we changed everything and I don't understand why.

"We've spoke about it and we need to take responsibility, come and get the ball, do what we do, play the way we normally play and that's the way we believe we can win

We didn't do that.

"We didn't create enough chances because we didn't match their desire

Congratulations to them, but from my point of view, we blew a great opportunity and it is just frustrating."