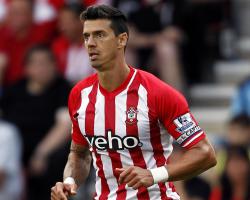 Saints' astonishing start to the campaign recently came to a shuddering halt, with the embarrassing midweek Capital One Cup exit to third-tier Sheffield United making it five successive defeats in all competitions.

It would not have been a surprise if the club's worst losing streak of the 21st century had continued on Saturday given the string of injuries and suspensions they had to contend with against Everton.

However, Ronald Koeman's side rallied impressively and ran out comprehensive 3-0 winners at St Mary's, where efforts from Graziano Pelle and Maya Yoshida added to Romelu Lukaku's first-half own goal.

"It's massive after the results that we've been having," Saints captain Fonte said.

"Not so much the performances, because I thought that we deserved more in a couple of games, but the fact is we had zero points in four games.

"So, to have a performance like we had, and get the clean sheet - three points, three goals - just puts us on the right track to go on a good run again."

The win had extra importance as it was Southampton's first point, never mind all three, against a team that finished above them last season.

Defeats to Liverpool, Tottenham, Manchester City, Arsenal and Manchester United fed those suggesting that Saints could not cut it against the top teams and were only flying high due to a kind fixture schedule.

The win against Everton, who finished fifth last term, is therefore an important marker, especially with home matches against Chelsea and Arsenal following the Boxing Day trip to Crystal Palace.

"They are great games, again," Fonte, suspended for the trip to old haunt Selhurst Park, said.

"We'll prepare ourselves first for Crystal Palace - that's the most important - and then we'll think about the others, but we want to prove we're at the same level."

Saints certainly looked back to their early-season form against Everton, who welcome Stoke to Goodison Park on Boxing Day - a match in which Steven Naismith knows the players need to make amends.

"Fortunately for us the games are going to come thick and fast now," he told evertontv.

"We've got the chance to rectify it in less than a week which is good.

"Then after that we have two more games in the space of a week so we will definitely be ready for Stoke on Boxing Day where hopefully we can change the result from Saturday and push on."