Fonte fronts up after error 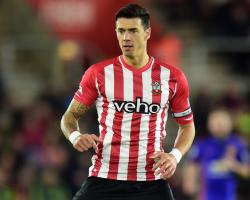 Dutch striker Van Persie then volleyed the winner in the second half after Graziano Pelle had dragged Saints onto level terms.

Fonte shouldered the blame for Saints' third straight defeat on his 200th club appearance - then challenged the squad to cut out the costly mistakes.

"It was frustrating: apart from my mistake and that free-kick in the second half, we weren't in danger," said Fonte.

"They didn't create much, whereas we were in control of the game.

"We were dominating, but we have to stop these mistakes and to try to avoid them because they're costing us.

"When you play in a game like this and play in the way we did - especially in the first half - then I think it's disappointing for everyone.

"We certainly didn't deserve to lose

We were as good as, if not better than, them - that's why it's disappointing

"We lost the game because of ourselves."

Saints have slipped to fifth in the Premier League table after consecutive defeats to Manchester City, Arsenal and United.

Southampton have struggled with the recent acid test of their top-four credentials and still face Everton, Chelsea and the return clash with Arsenal before the Christmas run abates.

Boss Koeman admitted his side had only themselves to blame for Monday's defeat to United, and Fonte could not argue.

Saints travel to early-season strugglers Burnley on Saturday, with Portugal defender Fonte determined to put an end to the run of defeats.

"Unfortunately, we made a couple of mistakes and that cost us some points," said Fonte.

"We need to learn from it quickly because, at the highest level, the big teams with top-class players will punish you - that's what's happened in the last three games.

"I'm disappointed and frustrated, but we need to pick ourselves up because we have another game on Saturday and we need to get some points."