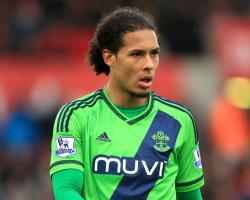 The 24-year-old Holland international has impressed at the heart of the Saints defence this season having arrived at St Mary's from Celtic in September 2015.

Manager Ronald Koeman spoke on Friday of his desire to keep hold of his star players this summer, so Van Dijk's new long-term contract will come as a major boost

The deal runs until 2022 and e xecutive director of football Les Reed said: "In his first year with the club, Virgil has quickly established himself as one of the top centre-backs in the Premier League, becoming an integral part of what has been another strong season for the team

"At 24, and with significant European experience already under his belt, we believe he can be a key pillar in our squad for years to come and we are delighted to have agreed this new deal with him

"Although Virgil only joined us in September we felt it was important to strengthen our commitment and we believe this also provides further indication of how serious our ambitions are for the coming years."

Me and my family have enjoyed it a lot this year

"The club is growing and I definitely want to grow with them, that's how I feel

Hopefully we can make it happen

That's the plan, to get a lot of achievements going."

Van Dijk, who cost the Saints ÃÂ£11.5million, is expected to start Sunday's clash with Tottenham at White Hart Lane.