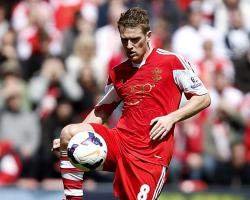 The England striker left St Mary's to join his boyhood team this week, completing a remarkable rise through the divisions to the Champions League.

Saints supporters will be devastated to see the hitman leave after a prolific five-year spell, but Davis does not expect any bitterness towards his former team-mate.

The Northern Ireland captain recalls how pleased Lambert was to play at Anfield as an away player and is glad he can now turn out for his hometown heroes.

"I think everyone is delighted for Rickie

Even the most diehard Saints fans who will have hated to see him leave the club will respect what he has done," said Davis, who will lead his country in a friendly in Chile on Wednesday night.

"He's had an unbelievable time there and fired the club from League One to eighth position in the Premier League.

"I think he has deserved this move, I don't think anyone will begrudge him it and I am delighted for him personally.

"I know how much it will mean for him to sign for Liverpool and I hope he will go on to be a success there which I'm sure he will because he has all the attributes and attitude.

"I'm sure he thought his time was gone in terms of getting his chance to go there but I remember how much it meant to him just to play at Anfield with Southampton in our first season back in the Premier League, he had all his family there.

"It's been an unbelievable rise for him and that is a credit to him for how he has adapted his game."

Saints fans may be less magnanimous if Lambert turns out to be the first of several high-profile departures, with Liverpool also circling captain Adam Lallana and Luke Shaw repeatedly linked with Manchester United.

Although the club are currently managerless, Mauricio Pochettino having been cherry-picked by Tottenham at the end of the season, Davis is confident a team who excelled last term will not fall apart.

"We had a great season and kept progressing, it went very quickly because it was so enjoyable," he said.

"Of course, it could be difficult to hold on to players but I'm sure the club has a plan in place to keep moving the club forward.

"We want to get to the next level and that means keeping the players we have and also adding to it."