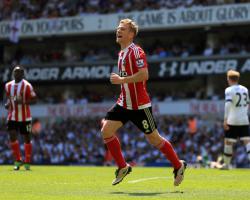 Mauricio Pochettino's side needed only a point to guarantee at least third place and looked on course for victory when Son Heung-min gave them early lead but Davis scored twice to ensure Spurs' final home game of the season ended in defeat.

It means Tottenham are now winless in three matches while Southampton move up to sixth and within touching distance of Europa League qualification.

If there were any lingering regrets from last week's surrendering of the title to Leicester it was not immediately obvious as White Hart Lane, bathed in sunshine, enjoyed a jubilant atmosphere, the fans seemingly happy to celebrate the team's remarkable progress this season.

Daniel Levy's gushing chairman's message in the match-day programme was no less appreciative, telling the fans this campaign had seen Spurs "remind us all why we love this game and why we love our club".

There is good reason for the plaudits but two points now from three games threatens to end Tottenham's season on a sour note, particularly if they cede second place to either Manchester City or Arsenal, who have endured a miserable 12 months by their own high standards.

The Gunners, who Spurs have not finished above since 1995, are now breathing down the necks of their north London neighbours, sitting three points behind with a game in hand, which comes against City later on Sunday.

Southampton, in contrast, are sprinting to the finish line, having now equalled their Premier League record points tally of 60 and lost only one of their last nine.

Ronald Koeman's work continues to overshadow the blow of Pochettino's departure two years ago and their priority this summer must surely be to tie their manager down long term.

Christian Eriksen and Dusan Tadic both went close in the opening 15 minutes but Spurs had started brighter and in the 16th minute took the lead when an offside Harry Kane let Erik Lamela's ball run through and as Southampton stopped, Son came alive, nicking the ball round Fraser Forster and slotting home his second in as many games.

The goal was Tottenham's 68th this season, their highest ever tally in the Premier League era, but if the hosts were hoping for end-of-season party in the sun they would soon be disappointed.

Kyle Walker went down after taking an arm to the face and as referee Jon Moss let play continue, Saints pounced, Tadic's cut-back allowing Davis to steer an equaliser under Hugo Lloris, who should have done better from close range.

Tottenham failed to respond when conceding against West Brom and Chelsea last week and it was not until the end of the half they looked like pulling ahead again, when Kane wrestled possession back on the touchline before seeing his angled finish denied by Forster.

The pattern remained set for the start of the second period too, with Spurs enjoying plenty of possession but struggling to break down their opponents, who in turn looked dangerous on the counter-attack.

The danger materialised in the 72nd minute as Davis played a neat one-two with Tadic before curling the ball past Lloris and inside the far post.

Tottenham huffed and puffed in the latter stages but rarely threatened an equaliser, their best chance coming in injury time when a loose ball spilled out to Nacer Chadli but his finish was saved.