Dave Watson gets new deal and job at Southampton 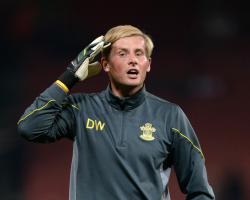 The 42-year-old, who also currently works as England's goalkeeping coach, moved to join Ronald Koeman's staff on the south coast two years ago having made a name for himself while working in the same position at Norwich.

He has now extended his stay with Saints, now under new boss Claude Puel, and the club confirmed his new position means he will still coach the first-team goalkeepers but will also oversee the goalkeeping work at all levels at the club's Staplewood training centre.

"I'm delighted that the club have wanted to offer me a new contract," he told Southampton's official website.

"I had no hesitation in signing that

"They made a lot of effort to get me to the club two years ago, and I had no hesitation in repaying that loyalty for the opportunity they have given to me

"We've got a fantastic department, running very well at the moment anyway

But, obviously, the main priority was overseeing the senior department."

With Fraser Forster established as the first choice at St Mary's, Puel also has Paulo Gazzaniga available, with both Kelvin Davis and Maarten Stekelenburg leaving over the summer through retirement and the end of a loan spell, respectively.

Les Reed, Southampton's director of football, was pleased to see Watson continue his association with the club and to have his role widened.

"I am delighted that Dave has put pen to paper and it is another example of belief in the Southampton Way and commitment for the long term," he said.

"When Fraser Forster committed his future to the club, it was important to ensure Dave was secured.

It makes sense to ensure there is stability and continuity in this department.

"Additionally, we have some very promising keepers in the academy, and it is important we have the structure in place to ensure they can turn their potential into excellence."