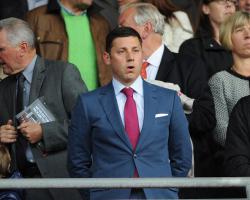 The Italian was appointed to the post in 2009 after being instrumental in the purchase of the south coast outfit that year by Swiss businessman Markus Liebherr, and Cortese has since overseen the Saints' rise from League One to the Barclays Premier League.

It is understood that Cortese is contemplating quitting due to divisions between him and Katharina Liebherr, who became the club's owner after the death of her father Markus in 2010.

However, reports that Cortese submitted his resignation in writing are understood to be incorrect.

Southampton have not made any official comment on the matter.

The news about Cortese is likely to cast doubt over the future of Saints manager Mauricio Pochettino.

There was talk of Cortese considering his position in May, and Pochettino subsequently warned he too would leave Southampton if the chairman chose to do so.

''I would not understand staying in this role if Nicola was not here," the Argentinian, appointed as successor to Nigel Adkins in January 2013, said at the time.

''The person that actually called me from the start, told me about the project and put their faith in me was Nicola.

''I have great respect as well for Southampton, the club and the supporters, but Nicola has been the one that has placed his trust and faith in me.

''I wouldn't see myself in this club if it was not for him.

''I think I am a very transparent person, a very honest person.

''We are on the same wavelength about the club and the future of the club so it really would not make any sense if I was at this club and he was not."