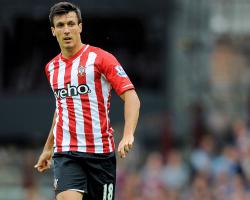 The 25-year-old will not play again this year after sustaining ankle ligament damage in Wednesday's late 1-0 defeat at Arsenal.

Cork's absence compounds an increasingly tough situation for Saints in central midfield, with James Ward-Prowse and Morgan Schneiderlin also out of contention for Monday's match with Manchester United.

Toby Alderweireld has helped fill the void in the past two matches but he is a doubt with a hamstring injury - hardly the ideal preparation for manager Ronald Koeman.

"I went to the training centre this morning about some updates of the players," the Dutchman said ahead of his clash with compatriot Louis van Gaal.

"Jack Cork has ankle ligament (damage) and he will be out for maybe more than six weeks from what I heard from the doctor.

"Morgan Schneiderlin is doing well but he's not fit for Monday.

It's not really a hamstring injury, it's more fatigue in his muscle and he's doubtful for Monday.

"Maybe yes, maybe not, we have to wait, the game is on Monday and now we have two or three days more."

Dusan Tadic has been passed fit to face United, but Koeman will not be fast-tracking Ward-Prowse back from a fractured foot.

That leaves Southampton struggling for numbers in central midfield, meaning 19-year-old Harrison Reed could make his first Premier League start alongside the likes of Victor Wanyama and Steven Davis.

"He is ready," Koeman said

"He's a young player and he has to develop himself, but always I'm a manager at a club who likes to have development of young players

That means also that you give chances to play.

"I didn't choose Harry when Schneiderlin went off in the game against City because of the level of competition, the physical strength in that game

Toby did it fantastic and the reason I did the same (against Arsenal when Cork went off).

"Harry played last Monday and young players need to play every week and he's an option for this Monday."