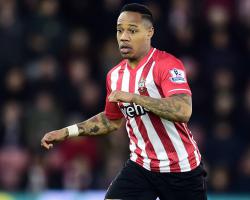 The 24-year-old has reportedly attracted the attention of Chelsea and Manchester United but, while "flattered" at such talk, he insists his mind is set on helping the Saints achieve a top-four finish in the Barclays Premier League.

Speaking at a FootballFightingEbola charity event, quoted in several national newspapers, Clyne said: "I'm flattered by the interest from the big clubs

That's what you play football for - that's the dream

We're doing well with Southampton and hopefully we can get there

That would be great

So I'm just concentrating on Southampton

There are a few more games to play, so I'm just concentrating on getting to the fourth spot."

Clyne, who has four senior caps to his name after making his England debut in November, left the most recent international get-together with words of encouragement from Three Lions boss Roy Hodgson ringing in his ears

"He just said: 'You've done ever so well since coming in

The right-back spot is yours at the moment, if you can continue on'," Clyne added

"He has the belief I will

He just gave me confidence, really

If I keep on putting in performances and keep on improving as a player, I can hopefully make the position my own and look to make tournaments, and hopefully win tournaments, with England as well

I feel as if I've settled in well at that level with the squad so far, but I'm hungry for more."