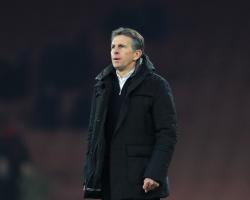 The Saints are through to their first League Cup semi-final since the 1986-87 season when they were beaten over two legs by Liverpool - the same opposition they will face in the competition in January.

They got there with a comfortable win over Arsenal at the Emirates, where Jordy Clasie and Ryan Bertrand scored in the first half

Puel said: "It was a great performance because this game was a different profile

"We were clinical in the first half, with two goals from two chances

"After, in the second half, we had many chances to score another goal and make the game safe against a good team

It was a fantastic game to achieve that result: good solidarity, good attitude

I enjoyed what my players did.

"We have a chance to play a semi-final, home and away, in the second half of the season

That was the objective.

"(There are) very important games in the future."

Arsene Wenger made 10 changes to his Arsenal side, but Puel - who made eight changes himself - said the strength of the opposition did nothing to detract from the win.

"For me it's a great performance," he said

"All the Arsenal squad are very good players

"Arsenal have the same philosophy as us: we can change, also, six or seven different players.

"The two teams changed their players, so you have to respect this for us and Arsenal

It was a really strong game from us, with quality."

Gunners midfielder Mohamed Elneny was the only survivor from Sunday's Premier League win over Bournemouth and even though Granit Xhaka and Alex Oxlade-Chamberlain came off the bench, Arsenal never looked close to getting on the score sheet.

"I regret that we lost the game," he said

"We had played well until now

"If you look at the players who played well tonight, some of those who did not play tonight were on the edge.

We had (Alex) Iwobi, one of the regular players in the first-team.

"The problem wasn't there

We had players who are used to top-level competition

But we didn't have the right urgency.

We had a disappointing performance, particularly in the first half.

"I think we were not good enough defensively and gave cheap goals away in the first half.

"It was better in the second, but it was one of those nights where you look like you could play two hours without scoring a goal.

We paid for that

We were not incisive enough in the first half especially."