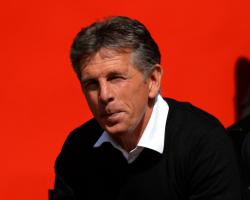 The 32-year-old captain, who was part of the Portugal side that won Euro 2016, is a doubt to feature in Saints' opening Premier League game against Watford.

Puel, who replaced Ronald Koeman as manager in June following the Dutchman's move to Everton, believes Fonte will be a key component for the Saints this season.

He said: "I do not think there is a possibility for Jose to leave us.

"I am sure that he can play all these games, he is very proficient.

"When I see him on the pitch he is interesting, very professional and he has a good attitude.

"(Fonte has) re-joined in training

I do not know if he will start the game (on Saturday) but we will see.

"The market window is difficult for the club and the players but it is very important for the team.

"Many clubs can be interested in players that is normal."

Talking about the European Chmapionship success of both Fonte and Cedric Soares, he said: "(When they came back from the Euros) there was a lot of congratulations because it is important.

"It is fantastic, two players of Southampton played in that team and won.

"It is very important to keep the confidence on them

Southampton start their Premier League campaign against a Watford team who have also made a number of changes over the summer, including bringing Walter Mazzarri to the club as the new manager

Puel is looking forward to getting to season up and running as there is always a level of excitement surrounding the opening weekend of a season.

He said: "It is an exciting moment for me and it is the same for the players.

"It is the first game

It is always a special day.

"It is important for the players and the fans.

"Watford has a new manager and new players.

"It will be a challenge, they can play in different systems and can challenge with defenders.

"They have different possibilities but I will concentrate on us, it is more important for us to stay in possession."