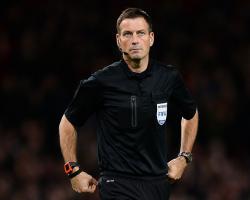 The club had complained about comments allegedly made by the match official to Southampton's England midfielder Adam Lallana.

The FA has considered the complaint and will take no action against Clattenburg.

An FA statement read: "The FA can confirm it received a complaint from Southampton concerning referee Mark Clattenburg and his alleged comments made to their player Adam Lallana.

"The FA has given its full consideration to this matter and it is our view that the comments, as disclosed in Southampton's letter of complaint, do not constitute misconduct under the FA's rules.

"Consequently, The FA will not be taking any further action in relation to this matter and now considers this case to be closed."