Charlie Austin hamstring injury not as bad as first feared 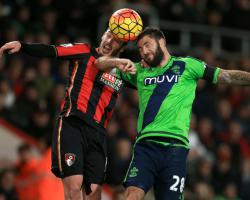 Saints lost 2-0 at the Vitality Stadium and both Austin and fellow striker Shane Long were forced off through injury.

Saints initially believed the former QPR frontman could be on the sidelines for two months but after a scan on Wednesday the injury is not as bad as first feared.

Manager Ronald Koeman said: "We did a scan yesterday and he will be out for three or four weeks with a hamstring

He said: "It is a different place (to those injuries he has had before).

"It is not the same injury that he had when he came to Southampton."

Southampton welcome Sunderland in the Premier League on Saturday but will also be without Long who was withdrawn after a knock on his knee.

Koeman said: "Shane Long is not available for the weekend but it is a different type of injury and we have full hope that he will be available next weekend but not this weekend.

"He was feeling a knock on his knee and it is really painful but it will not be a problem next weekend.

"We lost two and now we need the rest of the strikers to do the job."