Charlie Austin at the double as Southampton impress again 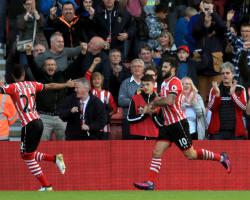 They maintained the fine form they had displayed before the international break by comfortably outplaying their visitors and securing all three points with two goals from Charlie Austin and another from Nathan Redmond.

Sunday's fixture represented Southampton's first in a run of seven in 22 days, the next of which is among the biggest in their history in the Europa League at Inter Milan.

Their manager Claude Puel has so far consistently rotated his team, but even with Shane Long, James Ward-Prowse and Pierre Emile-Hojbjerg among the substitutes they retained a strong look.

For Burnley there is little question that Premier League survival is their priority, but if they still felt frustrated at the misfortune of their recent 1-0 defeat by Arsenal, they were perhaps lucky not to concede earlier at St Mary's.

Then in the 31st minute, a long clearance from Southampton's Fraser Forster sent Dusan Tadic through on goal against Heaton, where a combination of poor finishing and fine goalkeeping again prevented them taking the lead.

Redmond also threatened, and Austin had lacked composure when wasting another fine chance with a poor finish when through on goal, but half-time arrived and the game remained goalless.

While Southampton had lost Matt Targett to injury - he was replaced by the little-known Sam McQueen - the injury to Burnley's ÃÂ£8million club-record signing Steven Defour felt more significant, and so it proved.

The young Aiden O'Neill came on in his place, and from that point the hosts' dominance increased.

Tadic's 52nd-minute corner was headed across goal by Virgil van Dijk, and from there Austin, from his second attempt amid Burnley's desperate defending, finally stabbed his first into the back of the net from directly in front of goal.

Redmond's, in the 61st minute, was of a higher quality

In space in the area after another corner, he waited for the ball to arrive at his feet before sending a low, classy finish into the bottom right beyond Heaton's reach.

Any doubt that remained vanished five minutes later, when Austin calmly finished with a penalty awarded when Johann Berg Gudmundsson brought down McQueen

The goal was his seventh from his past six games.

The reality, however, is it did little to improve their prospects

A third defeat in four leaves them only a point above the bottom three, and facing up to a difficult season