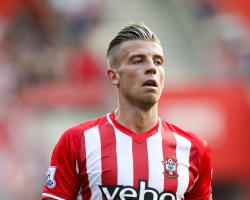 This has been quite the year for the 25-year-old, having made the loan move to Saints fresh from helping Belgium to the World Cup quarter-finals and Atletico Madrid shock the football world.

Alderweireld was part of the Los Colchoneros side which won a first Primera Division title in 18 years and came off the bench in the Champions League final, where rivals Real Madrid cruelly denied them a famous double.

It took extra-time for Real to eventually triumph and things could have been so different had star man Costa not been forced off just nine minutes into what proved his last match for Atletico.

The bustling forward moved to Chelsea in the summer and has so far justified his ÃÂ£32million price tag, with the Boxing Day strike against West Ham making it 13 goals from his first 15 Premier League matches.

Alderweireld faces the unenviable task of attempting to stop Costa adding to that tally on Sunday, with the defender well aware of the threat his former team-mate poses.

"It is very difficult because he is fast, he is strong, he has technique," he said.

"He can score goals, is good with his head, so I have to be at my best to stop him."

Costa is not the only threat Alderweireld knows all too well about, having this year also played alongside Eden Hazard, Thibaut Courtois and Filipe Luis.

"They are the best players in the world, especially Diego and Eden Hazard," he said

"We have to be at our top to beat them."

Despite that, he says Southampton will head into the match brimming with confidence after continuing their impressive resurgence at Selhurst Park.

Fresh from ending their worst losing streak of the 21st century against Everton, Ronald Koeman's men triumphed 3-1 against Crystal Palace thanks to goals from Sadio Mane, Ryan Bertrand and Alderweireld.

"It's the best feeling, even for a defender," the latter said after his first Premier League goal.

"I am very, very pleased that I could help the team and after we made it 3-0 it was over, I think.

"It is always difficult to win here and play here, especially over the Christmas period.

"They need the points and we knew that before, but I think we played very good, defensively it was fantastic and in important moments we killed the game.

"It is very important after a couple of difficult weeks to win again.

"They were two difficult games, Everton and now here at Crystal Palace, but we got six out of six points, made six goals and conceded one

We are getting our confidence back."

Chelsea will be a much bigger test, though, as will having to deal with such a quick turnaround - a new issue for manager Koeman and number of his players.

"Two days after a game, play another game - that has never happened to me before," Alderweireld added.

"I will prepare myself the best way I can and I hope to be 100 per cent for Sunday."